Does ShotSpotter make your community safer? No, not according to the research.

Research in cities to date shows:

ShotSpotter has been deployed to 100+ cities and counties.

ShotSpotter is paid by cities to set up microphones in secret locations throughout neighborhoods, using triangulation technology to locate loud, impulsive noises.

ShotSpotter has never been independently validated/tested for its ability to accurately distinguish among various loud noises. Without scientific testing, we don’t know how many impulsive sounds are incorrectly classified as gunfire.

Is ShotSpotter Near You?

There are active ShotSpotter contracts in over 100 cities. Find the one closest to you.

Search below to learn more.

Which sound could cause the police to be called to your location?

Noises like these have triggered ShotSpotter alerts. Turn your sound on and take the quiz.
Choose One

ShotSpotter claims it improves relationships between police and communities.

ShotSpotter increases the number of high-intensity interactions between police and civilians.

ShotSpotter claims that 80% of gunfire incidents are never reported to police.

ShotSpotter falsely assumes 100% of its published alerts are gunfire and further inflates this statistic by the way its system records alerts.

ShotSpotter claims to be a gunshot detection program that is 97% accurate with a false positive rate of less than 0.5%.

ShotSpotter claims it improves officer efficiency and evidence collection by telling them the location of gunfire.

ShotSpotter claims it is a forensic tool, providing forensic services and litigation support to trial attorneys.

Public defenders confirm that ShotSpotter regularly resists subpoenas and has asked to be held in contempt of court.

ShotSpotter has recorded more than loud sounds - it has captured voice recordings of people on the street that have been admitted as court evidence.

Responses to commonly used statements from ShotSpotter, Inc. and its executives.

What complicates the gun violence issue further is the fact that a full 80-90% of gunfire incidents go unreported via traditional 911 calls for service. This fact has been independently documented and researched and reported on by the esteemed Brookings Institution.

ShotSpotter Statement is Not Proven or Validated.

The Brookings Institution study did not validate ShotSpotter’s ability to differentiate between loud noises. Instead, it used ShotSpotter’s self-reported alert numbers to compare against 911 calls for service.

Note: Gunshots separated by 9 seconds or more are counted as separate ShotSpotter alerts. Two gunshots 9 seconds apart would likely be perceived by a witness as one incident – they would call 911 once. ShotSpotter will use these two alerts (vs. one 911 call) to inflate their statistics of gunfire that goes unreported via 911.

We only record impulsive bang, boom, pops, so we’re not recording voices and other sounds such as that.

ShotSpotter sensors, which are in unknown locations, are always recording. Prosecutors have submitted audio of voices picked up from ShotSpotter recordings on at least two occasions.

Statements about “97% Accuracy” are Marketing, Not Science

It’s certainly a fact that there hasn’t been an academic peer-review of the service, but I would push back in saying it hasn’t been analyzed. It’s been analyzed for twenty years across 100+ customers that are using it every single day.

Ralph Clark, CEO of ShotSpotter BBC Newsnight: ShotSpotter: What is gunshot detection technology and is it effective?

ShotSpotter Has No Independent Analysis or Testing.

ShotSpotter has never been independently validated/tested for its ability to accurately distinguish among various loud noises. Rather than test its technology, ShotSpotter starts with the assumption that 100% of its published alerts to police are gunfire and only reduces this number as officers self-report false positives (of the few departments that report, false positive rates have been as high as 48%). Legislators are willing to spend millions of taxpayer dollars on unproven tools to appear as if they are addressing gun violence.

The Human Cost of ShotSpotter

Michael Williams was wrongfully arrested and charged with the murder of Safarain Herring. Prosecutors had no witnesses and no weapon - the case rested primarily upon an impulsive noise detected by ShotSpotter, which was originally labeled by the algorithm as a firework. Williams, later freed, spent nearly a year in jail, suffering from two COVID-19 infections.

Update: The MacArthur Justice Center has filed a federal lawsuit on behalf of Michael Williams, Daniel Ortiz, and Lucy Parsons Labs for “damages, declaratory, and injunctive relief on behalf of themselves and their members, and a class of similarly situated individuals in the City of Chicago who have been or will be stopped by Chicago police officers responding to a ShotSpotter alert.” The defendants are the City of Chicago, Chicago Police Superintendent David Brown, and twenty Chicago Police Department officers.

Silvon Simmons, after being stopped in a car that was wrongly identified by police, was shot in the back by a Rochester police officer. ShotSpotter’s algorithm initially classified the noise as a helicopter, but upon a request to review by Rochester PD, ShotSpotter analysts reclassified the sounds as three gunshots and further increased the number of gunshots on two subsequent reviews (to four and five shots, respectively). ShotSpotter, Inc. refused to turn over the audio recordings to Simmons’ defense team for a reasonable price and Judge Christopher Ciaccio ultimately ruled the decision to convict Simmons was a mistake, in part due to the unreliability of ShotSpotter. Simmons, an innocent man, spent 18 months in jail.

Why do 100+ cities/counties use ShotSpotter if it’s so ineffective?

Technology and automation have helped society progress in so many areas of our daily lives - it’s natural for companies to try and fill that void for police even when they aren’t the solution.

We know that ShotSpotter can record voices on the street that could later be used in court. Prosecutors have twice, to our knowledge, tried to submit voice recordings as evidence, and one of them succeeded.

What about the contracts? What are the company’s legal promises to cities?

The only promises ShotSpotter makes to cities are detection/location, the time it takes to publish an alert, and system availability. 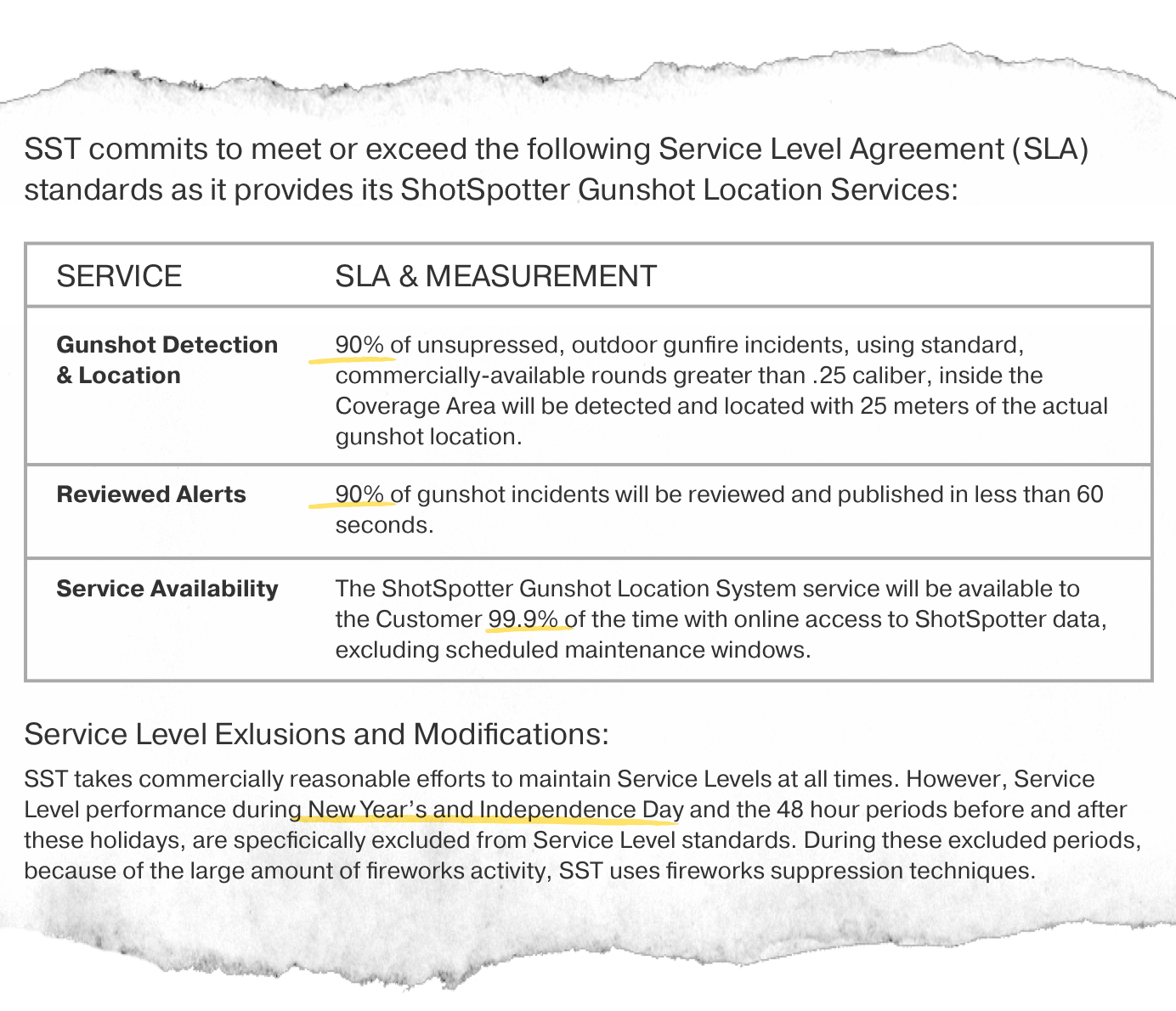 Who owns the data, ShotSpotter or the client (city/law enforcement agency)?

Nov 23, 2022
For the second time since 2018, the Atlanta Police Department has done a trial period with ShotSpotter and rejected the system.
Read Article

Lobbying and lawsuits: How ShotSpotter convinced Portland to spend big on gunshot detection

Nov 07, 2022
ShotSpotter, which sells technology meant to locate gunshots, has ramped up legal and PR spending to push back against criticism that its tech doesn’t work. In Portland, records suggest much of the sales pitch was intentionally hidden from public view.
Read Article

Tell your local officials to #CancelShotSpotter

Tell your city/county leadership that ShotSpotter has no place in our neighborhoods. ShotSpotter does not prevent gunfire, wastes resources, and does nothing to make us safer. Gun violence is a serious problem - we demand investments in solutions, not private corporations.

These contracts can be terminated at any time. Cancel the contracts.